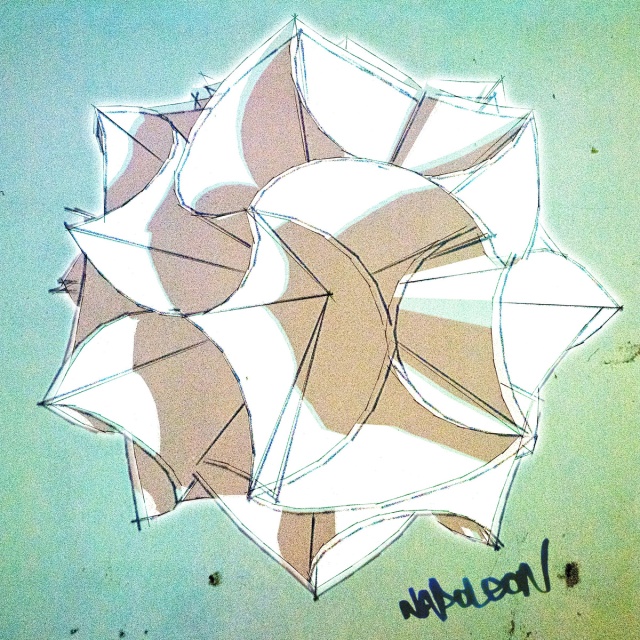 This year I got an unexpected surprise on my birthday when I woke up to see that Napoleon had just released a new EP in what looks to be a new ongoing series of imaginary soundtracks, similar to the epic run of monthly EPs he put out last year (which, if you haven’t checked those out yet, shame on you). Just having something new out in the world by Simon Mills is enough to sell me on the EP, but the idea of creating an original soundtrack for an imaginary project was more than enough to send me into music nerd heaven.

Simon Mills was kind enough to talk a little bit about his new project with me and of course the first thing I wanted to know was where he came up with the ideas for each of these proposed imaginary projects. “There’s a thread yes, a loose plot in each one, although that’s more just to help me piece the whole thing together. The themes tend to form after I’ve made a few tracks.” One of the future themes may be an homage to Tron, based on a scrapped idea for an EP he had last year, so keep an eye out for that one.

Video game and film soundtracks were what originally got me interested in music in the first place, and they were a huge influence for Simon growing up as well. “I would actually love to write a score properly for an existing piece, since I’ve had pieces in games and films before… I think a huge portion of my fave music is actually in soundtracks.”  The Yamabushi reminds me a lot of Miyazaki movies and PS1 JRPGs shot through Millsy’s unique electronic filter, basically checking off every box on everything it is that I love about music.

“Actually, the first song I did was ‘The Training Gardens’, which reminded me for some daft reason of an old computer game called International Karate – not entirely sure why, but alongside a couple of other sketches they felt part of the same universe. And from there I wrote more tracks and adapted them to have a similar palette and atmosphere. For me it’s almost like an early 80s obscure soundtrack, even though there’s house and disco elements in there. I guess it’s just how I perceive them!”

Early Japanese video game composers totally pulled their influences from Western sources as diverse as House music, Rock and Reggae, so I don’t know about you guys, but I’m totally on board with this interpretation. Of all the tracks “The Smell of Cut Grass” probably has the most old school video game soundtrack vibe to it, with synthesizer refrains that feel like they were ripped straight out from a classic Final Fantasy game.

But what’s the story of The Yamabushi actually about? “Well, it’s simply the clichéd tale of a warrior who has to infiltrate a fortress to save a princess.” I did a quick Google search for “Yamabushi” and found out that they’re Japanese mountain hermits with supernatural powers seeped in mysticism and I asked Simon, is that who the warrior is suppose to be? “Yeah, it’s derived from that. They apparently had a spiritual approach to life and fighting. The sleeve is an origami ball.”

I absolutely love this EP and I encourage anyone and everyone out there to come up with their own projects inspired by The Yamabushi, like this fan-made video for the final track on the EP, “Reborn (Ending Waltz)”. It’s probably one of my favorite tracks on the album. The song is so evocative that I bet if you asked someone what they were thinking of when they listened to this song that they could probably tell you what was suppose to happening in this imaginary story without knowing a thing about the project.  Simon had this to say about it: “The final track is kind of like the victory theme… which someone has made a video for, randomly… It’s not in line with the theme of the piece, but I love the references in it to vintage electronics, as that is me all over!”

This entry was posted in Interviews, Music Videos and tagged Napoleon, Simon Mills. Bookmark the permalink.